A Grouch at a Party 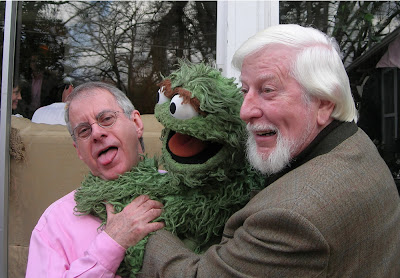 Or maybe I should say 'the' grouch. The party promised 'Sweets and Treats' in honor of the season. Valentine's, that is. That's why FFP has on a pink shirt. The reason Oscar the Grouch is going for his throat or why Oscar was at the party is less clear. We found wine and champagne and coffee and an array of sweets. Expected. We found a lot of people including many known to us as 'the usual suspects' in our circle. But Oscar and his handler, Caroll Spinney, were a surprise. Mr. Spinney, it turns out, played Big Bird on the actual show and, apparently, Oscar sometimes, too. Some little kids were watching in awe. I said "Who's the green one?" A little girl looked up at me in amazement and whispered breathlessly "Oscar." Inside the house later (the picture was taken in the pleasant garden on a pleasant Austin day) we were listening to the piano player and I was eying their book collection when I saw a copy of Mr. Spinney's book about his Sesame Street experience on top of a pile. We never found out from the hosts when they became friends with him or exactly why he was there with Oscar.

That's what makes parties great. A little something unexpected!
Posted by Linda Ball at 7:32 AM

A picture a day. Every picture taken within the confines of Austin, Texas, U.S.A. More or less. If it isn't a current shot, we will try to note when it was taken. We are part of the City Daily Photo family. Which has a facebook group. Here's the Official View of Austin.